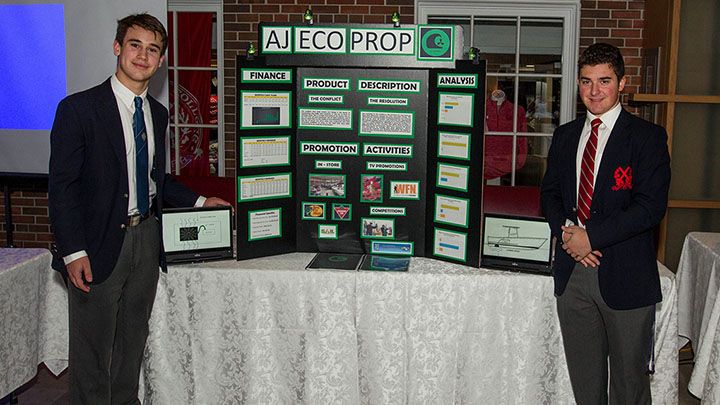 Leadership skills are not just important in the world of business, but can also be applied to other disciplines including science, mathematics, and the arts. While the development of strong leadership skills among SAC students has always been a priority, it has recently become a prominent area of focus within the Business Studies program. Through the design and implementation of the McEwen Leadership program in 2007, St. Andrew’s is now poised to educate a future generation of leaders and successful St. Andrew’s alumni. The program is designed to incorporate leadership principles into a variety of business disciplines, while providing experiential learning opportunities for students through all grade levels in the Upper School.

This entrepreneurial-student leadership program is the personal vision of alumnus Rob McEwen ’69, Chairman and CEO of McEwen Mining Inc., and founder and former Chairman and CEO of Goldcorp Inc., which is the world’s second largest gold producer based on market capitalization. Rob followed his father into the investment industry and also developed a passion for gold.


In 1990. Mr. McEwen stepped into the mining industry, where he transformed Goldcorp from a collection of small companies into a mining powerhouse. Since 1993, when Rob started re-structuring Goldcorp, the company's market capitalization has grown from $50 million USD to over $8 billion and its share price has increased at a 31% compound annual growth rate.

Rob believes management should be as personally invested in a company as its shareholders, and as such he owns 25% of McEwen Mining Inc. and receives no salary.

On July 3, 2007 Rob was appointed to the Order of Canada, the country's highest civilian honour.

Rob’s commitment to support leadership education extends back to his days as a student at St. Andrew’s, and he has endowed a chair in leadership studies through an original contribution of $500,000. This generous gesture is also unique, as it is the first endowed academic chair in the history of St. Andrew’s.